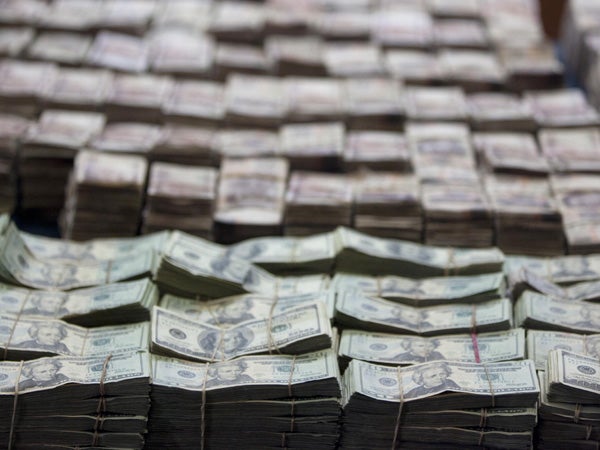 The latest Treasury Office data released on Wednesday (December 1) showed that total bonds rose 0.46% to 11.97 trillion pesos in October, from 11.92 trillion pesos in September. Year-over-year, the outstanding debt jumped 19.4% from over 10,000 billion pesos at the end of October 2020.

Locally sourced debt increased 0.96 percent month-on-month and 19.7 percent year-on-year to 8.47 trillion pesos. The Treasury attributed these increases to the net issuance of government securities, meaning that treasury bills and bonds – including double-tranche RDBs – that were sold in October were past due.

Domestic debt represented 71% of the total at the end of October, as the government relied more on local borrowing to take advantage of the liquidity injected into the economy by low interest rates while avoiding the risk of exchange rate fluctuations. .

Treasury data showed that 8.45 billion pesos, or 71%, of outstanding debt was denominated in pesos.

External debt fell 0.74% month-on-month to 3.5 trillion pesos. But the outstanding debt granted by multilateral lenders and bilateral development partners to the Philippines increased by 18.7% from 2,950 billion pesos in 2020.

The Treasury said the stronger peso in October compared to September reduced the month-on-month foreign debt by 31.13 billion pesos. The peso ended October at 50.552 against the US dollar, rising from 50.879 to one dollar in September.

In addition, funds from foreign loans that poured in in October were a smaller net amount of 4.96 billion pesos, the treasury added.

In terms of the type of debt instrument, P9.9 trillion of debt at the end of October was government securities and P207 trillion was concessional loans.

Most of the outstanding loans will mature after more than 10 years â€” 7.76 trillion pesos or 64.8% of the total had long-term maturities.

As debt accumulation exceeded economic growth, the debt-to-gross domestic product (GDP) ratio at the end of September reached a 16-year high of 63.1%, above the 60% threshold considered. by rating agencies as manageable among emerging markets like The Philippines.

The Treasury reduced its domestic borrowing program for December to just 70 billion pesos, so that the debt-to-GDP ratio – which reflected the capacity to repay bonds – would end in 2021 at the target level of 59.1 percent, equivalent to to 11,730 billion pesos.

Despite higher loans to be added to the government’s COVID-19 war fund, Dominguez told foreign chambers of commerce last week that sound debt management was being practiced even before the pandemic, allowing the government to reduce the costs of public debt.

The latest data from the Department of Finance (DOF) showed that the Philippines has borrowed a total of $ 22.58 billion – or 1.15 trillion pesos – to date, to fight the inflicted health and socio-economic crises. by the protracted COVID-19 pandemic.

â€œOur average annual interest rate on domestic and external debt fell from 6.3% in 2010 to 3.9% in September 2021. This reflects the country’s success in maintaining good macroeconomic fundamentals,â€ Dominguez said.

In addition, Dominguez said debt affordability remained “well manageable” due to the declining share of interest payments in revenue collection as well as government spending.

For Dominguez, the current level of debt â€œremains eminently sustainableâ€. “The stability of the peso indicates it.”

“We plan to start reducing our debt by next year,” he said.

Talgo (BME: TLGO) takes risks with his use of debt