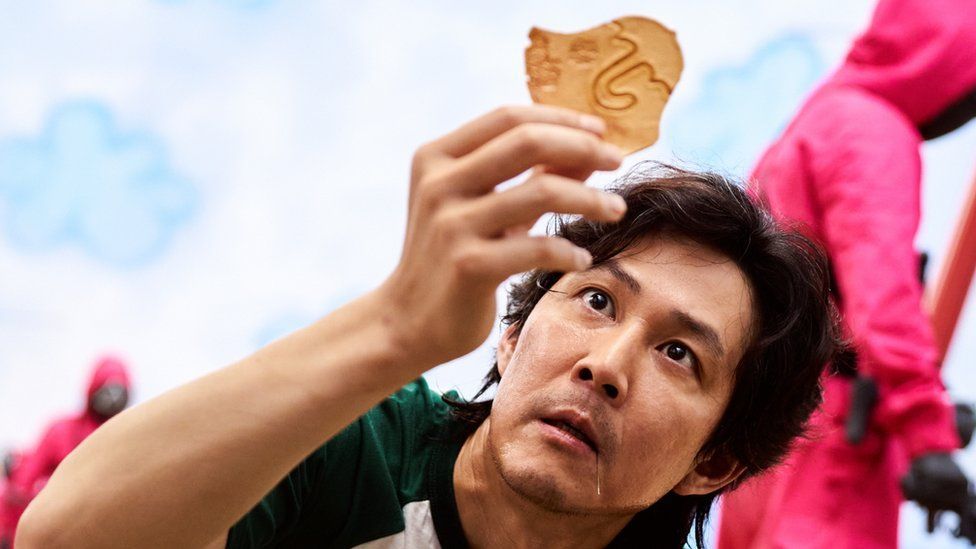 The Honeycomb Squid Game Challenge, among other games featured in the South Korean survival thriller, has piqued the curiosity of many Netflix viewers who are intrigued to see if they could beat the characters in the series. Naturally, I also wanted to test my pressure honeycomb sculpting skills. However, the process ended up being a lot more difficult than I expected even though I only needed two ingredients.

But before I dive into my disastrous experience trying to make Squid Game’s honeycomb candy, let’s recap the show for those unfamiliar with it.

In case you’ve been living under a rock for a month, Squid Game has quickly grown into a streaming sensation with the potential to become the most-watched Netflix show of all time, rivaling shows like Bridgerton and Emily In Paris. In short, the survival thriller is a mixture of Hunger Games and Battle Royale. The plot unfolds as 456 people struggling with debt join a mysterious series of children’s games to win a prize of 45.6 billion yen (or US $ 38.7 million). The only downside? Well, every time a player is knocked out they die.

The TV show featured a number of children’s games, such as “Red Light, Green Light”, “Step By Step” and more. And although we are more or less familiar with the format of such games, recreating the exact scenarios is tricky in real life. However, one of the games is really easy to try out at home (removing the elimination factor, of course). And that’s the honeycomb challenge.

What is the honeycomb challenge?

Basically, the player is given a flat candy made of sugar and baking soda with a pre-cut shape in the middle. Each player must separate the shape from the surrounding part of the candy without it cracking or breaking. To do this, players can be creative with their methods, although the only tool available is a regular toothpick or sewing needle. Oh, and the task should be completed within 10 minutes as well.

But if you want to have a go at the home game, sculpting the form isn’t even the hardest part of the challenge. Full disclosure, the process of making honeycomb candy (also called “dalgona candy”) is much more difficult than it looks. While the recipe involves only two basic ingredients that can be easily found in any household, the technique itself is quite tricky. For my part, I only managed to do this correctly after my sixth attempt, after wasting half a packet of sugar and spending at least five minutes cleaning the pan after each unsuccessful attempt. So if you don’t want to get tired of the smell of caramelized sugar, read on.

Below I have prepared a step by step guide based on countless YouTube and TikTok videos that I have watched on how to try out the Squid Game Honeycomb Challenge, while keeping in mind. mind the difficulties you may encounter and the things you should avoid. Basically I spent a good two hours trying to make the candy over and over again so you didn’t have to.

Here are the tools and ingredients you will need:

Before you dive into the cooking process, prepare your station and tools accordingly, and make sure everything you need is on hand. For once, you can get ready for a game of squid. Place your baking sheet next to your pan and spread the non-stick waxed paper on top.

Make sure you generously grease the candy press and cookie cutters to prevent them from sticking later in the process.

1. Heat your stove over medium-high heat. Once heated, add your white sugar (we recommend three tablespoons per candy). If this is your first time, try not to make more than one candy at a time, as it might be difficult to get the proportions right.

2. Be patient so that the the sugar begins to melt gradually. Try mixing it with a silicone spatula, chopsticks or a spoon once the melting process begins. It should look a bit lumpy as shown in the image below.

3. Continue to mix until your melted sugar acquires this caramel color., but be careful not to burn it. At this point, lower the heat to medium.

4. Add a pinch of baking soda, but don’t add more because your candy could end up tasting strange. Mix well and your mixture should become frothy and get a slightly creamy color.

5. Once the baking soda is incorporated into all the caramelized sugar, take your saucepan and pour the mixture onto the waxed paper on your baking sheet. Try to hold your pan firmly so that the mixture pours out in one spot, creating a circular shape.

6. Wait about 4-5 seconds until the bubbling sets in a bit and squeeze the mixture with your pre-greased pressing instrument of choice. Press down firmly, but be careful not to press too hard, as the candies will harden too quickly and may shatter when you use the cookie cutter.

It is important to squeeze your candy while the mixture is still hot, otherwise it may resist the pressure. Also, try applying pressure towards the center of your press, so that the candy spreads evenly, recreating an almost perfect circle.

7. In a rapid and circular motion, turn the press over and lift it gently. It should come off without any sticking. Steps 6-7 are the hardest to pass, so don’t be discouraged if you didn’t pass the first time around. You can try replacing your pressing tool with something else.

Traditionally, dalgona candy is made with a metal press that looks like a hamburger press, but you can go for something else with a flat surface instead. Some people used a frying pan, a dish, while we used a container lid. And don’t be shy with the oil, you can always remove the excess from the candy later.

8. Once you’ve successfully squeezed your candy, stick your cookie cutter right in the middle of the candy and hold it there for a good 5 seconds, then lift it gently.

9. If you’ve taken this step, congratulations, the hard part is over. Only let your candies cool and harden, then carefully remove it from the waxed paper. Ultimately, your honeycomb candy should look like this:

How to complete the Squid Game Honeycomb Challenge

Now that you have your honeycomb candy, it’s time for the ultimate test. Set a timer for 10 minutes and try to get the shape of the candy without breaking or cracking. In the image on the left, we tried using a toothpick first, although the method was quite risky as the toothpick ended up breaking quite quickly. If this happens to you, try using a sewing needle (the instrument the players got) instead.

You can also try Seung Gi-hun’s method, which involves flipping the cookie over and licking the edges of the shape so that the shape ends up falling off. Be careful, this method takes longer and the extremely sweet sweet taste can make you sick. For me, the latter method was longer, but effective.

I successfully completed the challenge in less than 8 minutes.

Here’s why AMC’s biggest figure could be $ 5.5 billion