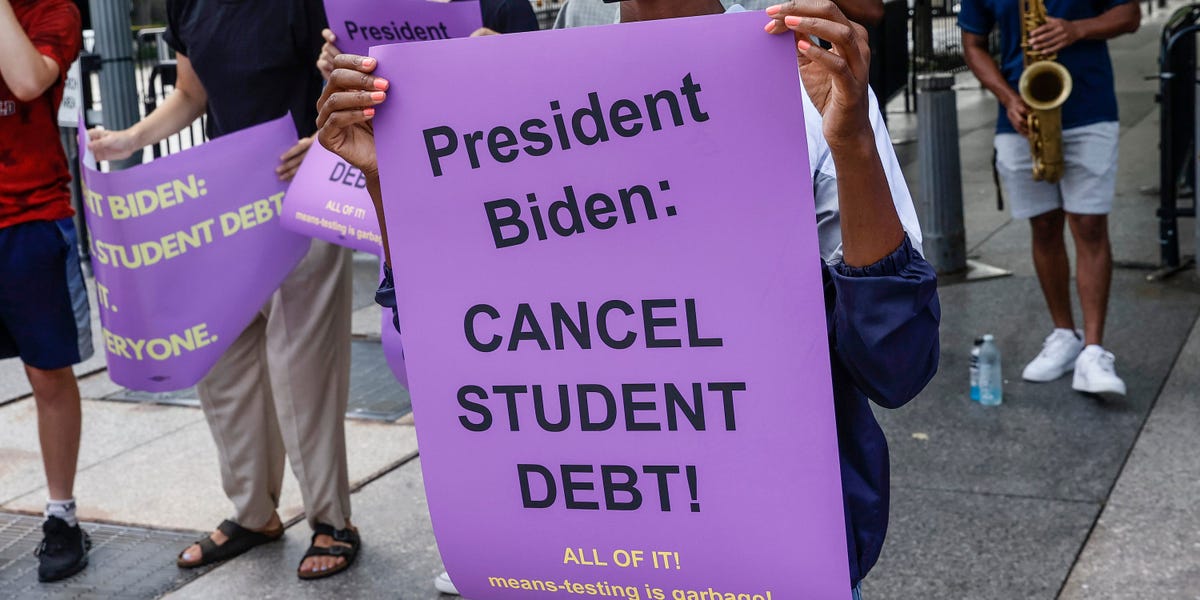 Americans are eagerly waiting for President Biden to announce whether the federal student loan payment pause, which is due to end August 31, will be extended. And a group has a plan to act if the pause ends and payments resume.

The Collective debtan organization that allows borrowers buried in student loan debt to regain power over federal student loans, is encouraging borrowers to strike Sept. 1 if the payment break is not extended.

At the time of this writing, 1,762 student borrowers across the country have signed up to join the group’s debt strike. A debt strike, the Debt Collective explains, is a refusal to pay monthly student loan repayments to send a message to the federal government in favor of large-scale student loan cancellation.

“To be clear, we absolutely do not encourage people to default on their student loans,” says Braxton Brewington, press officer for Debt Collective. “If you fail to repay your loans, it will hurt you, not the federal government.”

On its website, the Debt Collective acknowledges that some people won’t be able to join the Student Debt Strike because missing payments on federal student loans can hurt your credit, which, in a domino effect, can hurt your your ability to get a house or apartment, find a job and access other forms of credit. In other words, if you can’t reduce your payments to $0 without hurting your credit, you shouldn’t join the strike.

However, the Debt Collective wants to let as many Americans as possible know that there are ways to dramatically reduce your monthly student loan payments, in some cases as low as $0 per month. Here are two ways to do it.

1. Opt for an income-driven repayment plan

REPAYE, PAYE and IBR schemes are all income-driven repayment plans that can significantly reduce your monthly payments. Monthly payments are calculated based on your discretionary income, your monthly income minus your fixed expenses each month.

Your monthly payment will drop to $0 if your adjusted gross income, or AGI — meaning your gross income minus adjustments — was below 150% of the federal poverty level of $12,880 in 2021, which means your total income is less than $19,320.

Here’s what you need to know about each income-based repayment plan, according to the Federal Student Aid website:

2. Dispute your student loans if you went to an eligible college

On June 1, the Biden administration wrote off $5.8 billion in student debt for borrowers defrauded by Corinthian Colleges. And on August 4, a federal judge granted preliminary approval to the Sweet v. Cardona which will forgive student loan debt for 200,000 borrowers who went to colleges that defrauded their students, eliminating approximately $6 billion in student loan debt.

Students who attended other colleges that defrauded their students, such as the ITT Technical Institute, also had their debts erased.

Borrowers who attended Corinthian Colleges do not need to take any additional steps to have their debt cleared. Borrowers who attended a school listed in the Sweet v. Cardona have to ask Borrower Defense Loan Release on the Federal Student Aid website before the court finally approved the settlement. You must also provide supporting documents.

According to a press release from the U.S. Department of Education issued on April 8, you can continue to remain on forbearance after August 31 if:

If you meet these criteria, your payments will still be suspended even after the national payment suspension ends on August 31.

REITs make biggest buy of ₹44,481cr on stock market in less than 3 weeks of August

Here’s why NHPC (NSE:NHPC) has a heavy debt load