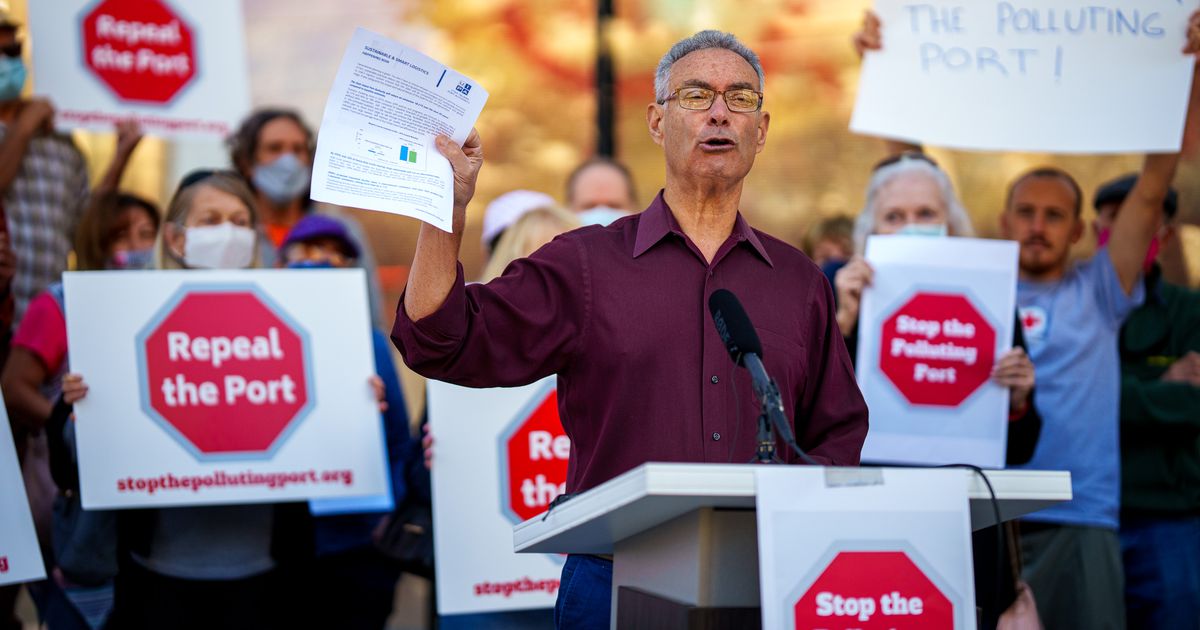 But the director argues that the port authority must act quickly to secure funds for train lines, a transshipment facility and an alternate refueling station.

Just moments after the start of a protest against Utah’s Inner Port, the port’s executive director announced that the council would postpone its vote on whether to incur millions in debt that would fund increased rail access in the Northwest quadrant of Salt Lake City.

A special meeting of the Utah Inland Port Authority (UIPA) board of directors was scheduled for later Monday afternoon. A port spokeswoman said she had “no idea or sense” as to when the vote would be postponed.

“You made a difference,” Deeda Seed, member of the Stop the polluting port coalition, told protesters gathered outside the IUAP headquarters in downtown Salt Lake City.

The question was whether to create a public infrastructure district, or PID, with the power to issue up to $ 150 million in bonds. Details of how the money would be spent have been vague, but a truck-to-train transshipment facility, alternative refueling station, and new rail lines are among the costly items discussed by port staff and consultants. days.

Salt Lake City Mayor Erin Mendenhall and City Council published a letter at the end of last week, wondering how the bonds would be repaid, why the public had not been allowed to intervene and why the port authority was rushing to approve the PID.

“I chose to delay the vote in an attempt to narrow this discussion of PID down to valid arguments,” IUAP Executive Director Jack Hedge said in a brief emailed statement, “and not fuel more political fires “.

The UIPA had planned to repay the PID bond using property tax revenues. The legislation allowed the port to claim 75% of future property taxes that would have gone to Salt Lake City in an area that encompasses one-fifth of its land area.

Salt Lake City has since pursued revenue control, arguing that handing it over to an unelected authority violates the state’s constitution. The case is currently before the Utah Supreme Court.

Hedge also issued a letter in response to elected officials in Salt Lake City on Monday. He explained that the UIPA could currently issue a bond if it wished, but the PID created more flexibility as landowners within the district boundaries could accept an additional tax to finance or maintain port projects.

“This tax, if ever approved,” Hedge wrote, “would take nothing away from [the city’s] taxes or its general fund, or that of any other fiscal entity in any way.

He further noted that not all of the projects that would be funded by the proposed PID are within Salt Lake City limits – the alternate refueling station would be in West Valley City, he said.

“Freight comes from and travels to all areas of the state and region,” Hedge wrote, “which is why the legislature created the UIPA with a much broader purpose than what happens in [Salt Lake City]. “

Hedge also took issue with the city’s claim that the PID would pay up to 8.5% interest on its bond and argued that with market rates at historically low levels, the UIPA should act. quickly to secure funds.

“If the UIPA fails to move forward quickly with these critical UIPA infrastructure plans,” Hedge wrote, “such [a delay] will negatively affect other private investments.

During their demonstration Monday morning, opponents of the inland port applauded the postponement of the PID vote. “The audience has been heard today,” Seed said, “but, of course, this battle is not over.”

UIPA officials said bringing more cargo to the port by train instead of trucks would reduce congestion and emissions in Utah. Opponents of the port argued that adding a transshipment facility would instead bring more trucks to the Wasatch front. They highlight the agreements signed by the UIPA with two Californian ports for the transshipment of their rail freight.

“Looks like we’re turning a California problem into a Utah problem,” coalition member Katie Pappas said at the protest.

The resulting pollution would harm public health as well as the ecosystem of the Great Salt Lake, according to protesters at the port. And the alternative refueling station proposed by the UIPA would do little to reduce air pollution from that traffic, coalition members said on Monday, as UIPA’s own business plan predicts that only 30% of heavy-duty trucks would switch to cleaner fuels like hydrogen and natural gas by 2050.

“As other states and countries grapple with the realities of climate change, we will step back,” Pappas said. “… If this transshipment facility is built, that will be the event that we look back on and say, ‘This is where we could have stopped it. “”